Here we are, at the end of another month. July. What an obnoxious month. Seriously – I was going nuts. It was about a hundred degrees here daily. Air conditioning is not a given anywhere – least of all in apartments. Sleeping was tough. Plus I got to add in my favorite part of Spain to just add some extra fun to the month – bureaucracy!

Peak of the Month 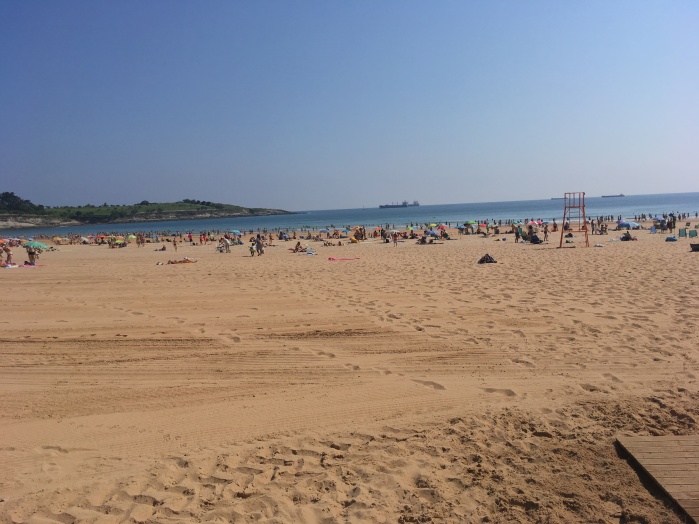 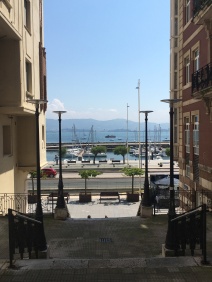 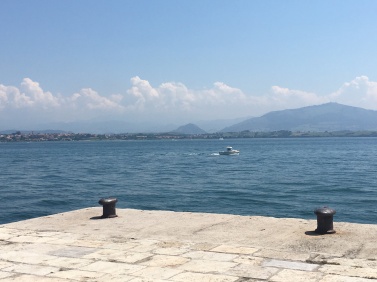 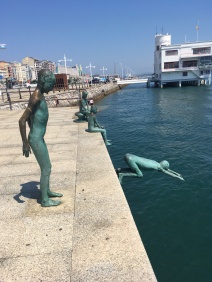 The Peak of my month was definitley my beach day in Santander. Santander is a quiet city which I literally decided to go to thanks to its mild temperatures (only 75 or 80 instead of 90 to 100). It didn’t actually have a great first impression with me. I blame the gang of about 60 English kids screaming at each other as I tried to eat lunch while waiting to check into my hostel. It was super obnoxious. As soon as I saw a glimpse of the green coast – I was charmed. 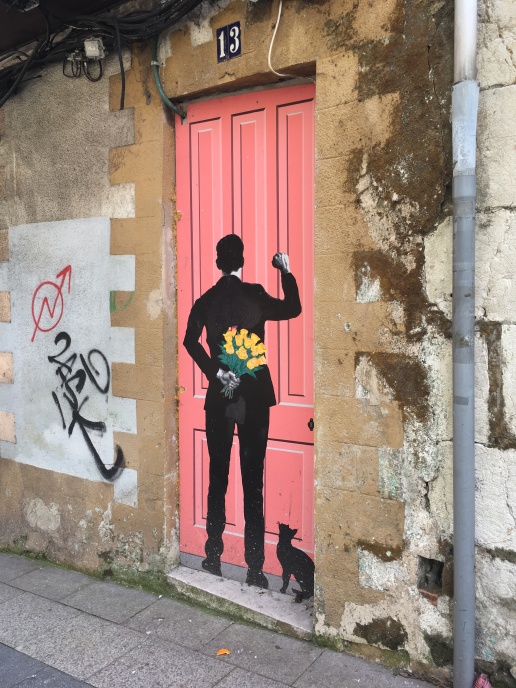 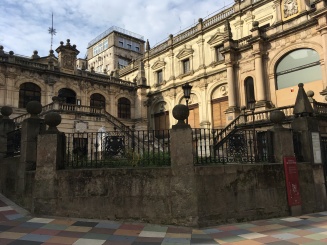 I don’t think I could live in Santander but the coast is absolutely breathtaking. It’s surrounded by green hills and mountains plus the beaches have amazing gold sand. It was like paradise for me. I went to the beach for a whole day by myself. It sounds like such a dorky accomplishment but I felt comfortable for the first time leaving my things unattended on the sand while I went for swim after swim. The water was absolutely perfect, the sun was incredible. The sunburn that lasted for a few days on my back – that wasn’t so nice. There was the one downside of my lovely beach day.

Pit of the Month

For a month all about not working, holy shit it’s been stressful. Immigration is a nightmare anywhere on Earth even with all the right paperwork. As much as my Spanish has improved – and it has – it’s still not up to extremely technical spanish regarding immigration. It’s been tough and I finally did something I somehow never think to – I used my resources.

One of my roommates, Oscar, happens to be a Civil Servant who knows people who work in foreign affairs. With his extremely kind help, I was able to not just get one of my papers in order, but rather both a renewal of my green card and my re-entry permit. So It’s official! I can come back to America to visit my friends and family in less than a month!

Some things I brought in: 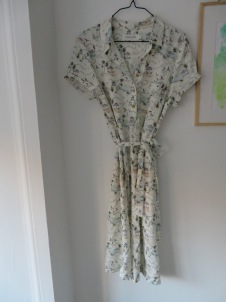 Indi and Cold – While I was in Santander, I spent a day enjoying the sales. the two sale months in Spain are nuts – things are on sale normally 50-70% in July and February. So I went to all the usual fast fashion places only to find nothing that I felt was worth the ethical compromise. I was about to give up when I stumbled upon this small shop called Indi and Cold – turns out they are a brand based out of San Sebastian in the Basque Country. I got a dress and two shirts which fit perfectly and I love to bits. I absolutely lost my mind with this print of beach vacation scenes and have no shame in the fact I bought two things in the same print.

New bras – ok so let me start by saying the following. My bra journey was completely changed a few years ago by the incredible women of Lace and Day in Buffalo, NY. I finally was in bras that fit perfectly every time. So I was really sad to leave them in my hometown and not have these amazing ladies with me everywhere I went. However, they also armed with with knowledge of good brands and a size to start with. My boobs are sort of massive and obnoxious and I am meticulous about supportive bras. So I actually repurchased a classic tee-shirt bra by Simone Pearle, which I had originally bought at Lace and Day, as well as another nude in the super sales. If you aren’t aware – you really should be replacing your “daily” bra collection every six months. While that’s a little out of my budget to replace 5-6 bras – I really try to replace 2-3. 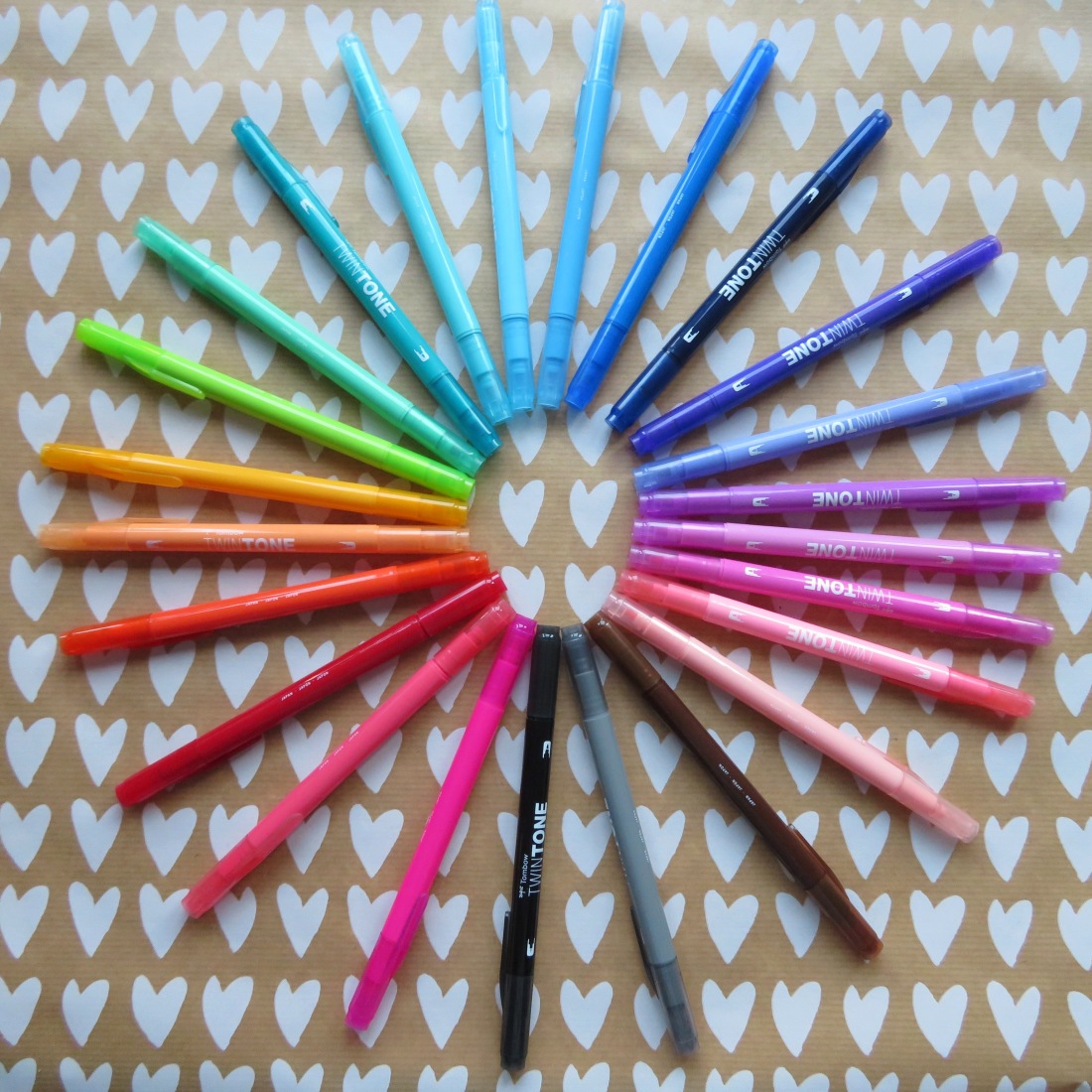 Tombow Twin Tones (Brights) – So I have the other 12 Tombow Twin Tones and at first I was not a huge fan if I’m honest. However, I started using the thin pen end more than the marker end and I realized their potential. I love using them now in my planners. So I decided that one thing I would get myself was the bright set and so far, I’m really happy. A lot of the colors are classic Madeline and I’m glad to have them in my collection.

My favorite things of July

Music – this month has honestly been about the Yann Tiersen for me. I’ve been doing quite a lot of reading and I have really enjoyed listening to the Goodbye Lenin or Amelie Soundtracks as background noise. That sounds like I’m putting them down but honestly they are comfortable and lovely.

Television – This month has really been TV heavy for me. I’ve completely rewatched Jane the Virgin which is one of my all time favorite shows. If you haven’t watched it – you should. While it definitely does not take itself too seriously, I really like it’s political commentary which is occasionally sprinkled in. Topics like Hispanic/Latino identity, abortion, illegal immigration, motherhood, slut shaming and feminism are all tackled in a way that is a little bit more subtle than other shows.

On the other end of the spectrum, The Vietnam War, a 20 hour documentary series, finally came onto Netflix. Obviously not light and fun to watch but I’m such a sucker for documentaries. There was so many complicating factors of the war that I just didn’t know about from the French colonization of Vietnam in the early 20th century to the differing reactions of Americans at home throughout the war. It was really fascinating and I’m glad I dedicated a week of my life to watching it.

My flatmates – ok so this is one that’s taken me awhile to open up to. But this month, I’ve had a new appreciation for (three) of my flat mates. My roommate Monica and I spent a day at the pool together which was so nice. She also got a job she’s been working towards for YEARS and I was so lucky to celebrate with her (pinchos and wine for the win)! My roommate Oscar and I have had some lovely conversations and as I mentioned, he helped me with something extremely important. Finally, my flatmate Thomas is this funny guy who just is always smiling and his celebration of France winning the World Cup was a little bit infectious – even if I was rooting for Croatia. 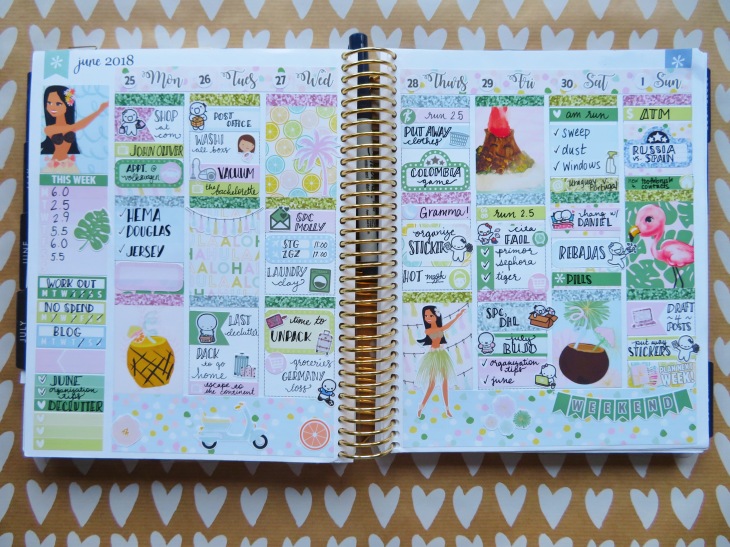 I’ve been enjoying working on both of my planners. I’ve been having a little bit of trouble with finding the right pens to work on different stickers in my Erin Condren (annoying) and I have a few favorite beachy spreads from the month. I made a conscious effort to use some older kits and not only jump to use new releases. 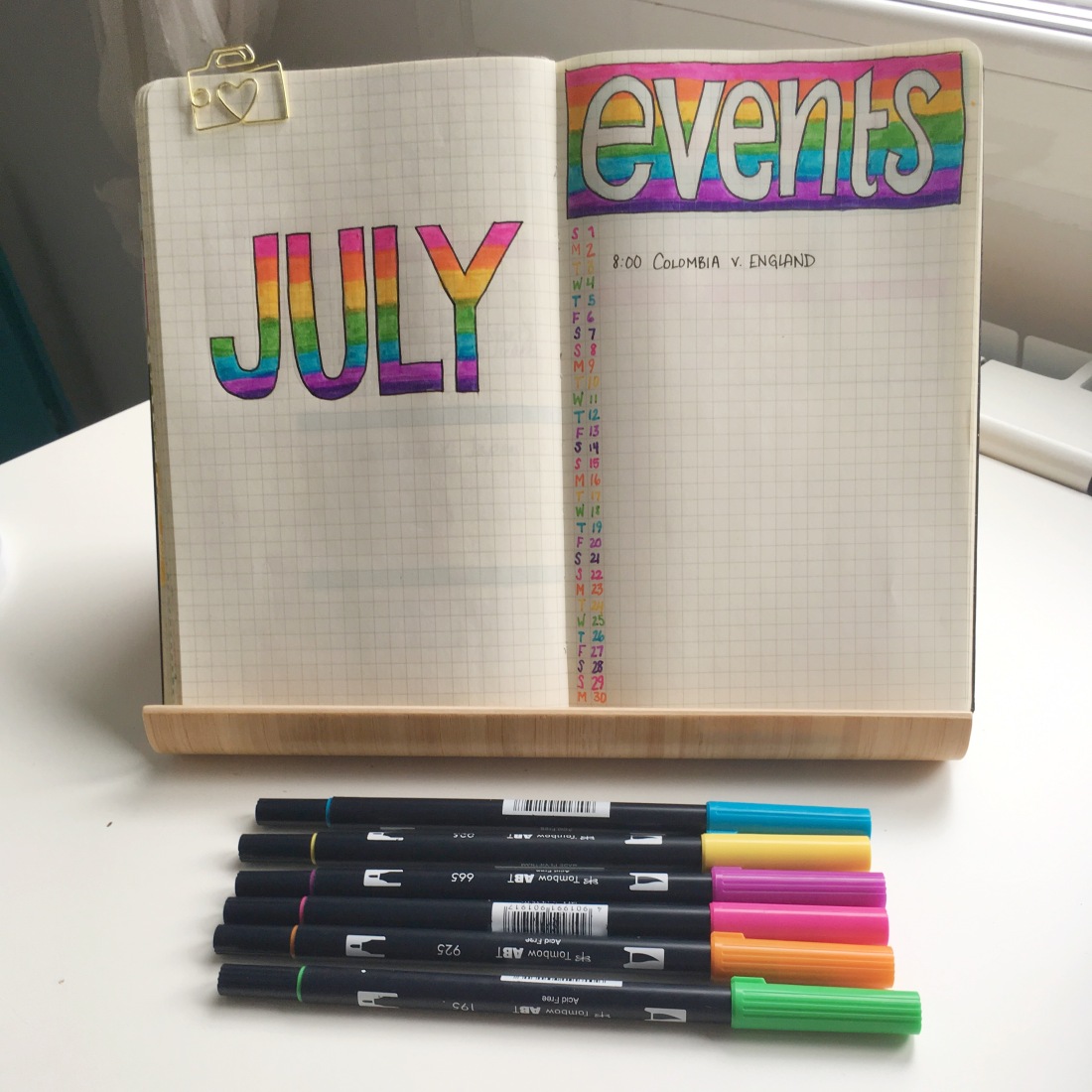 My bullet journal decoration theme was limited this month – rainbows. I didn’t really have time to think of something when I came back from Germany. 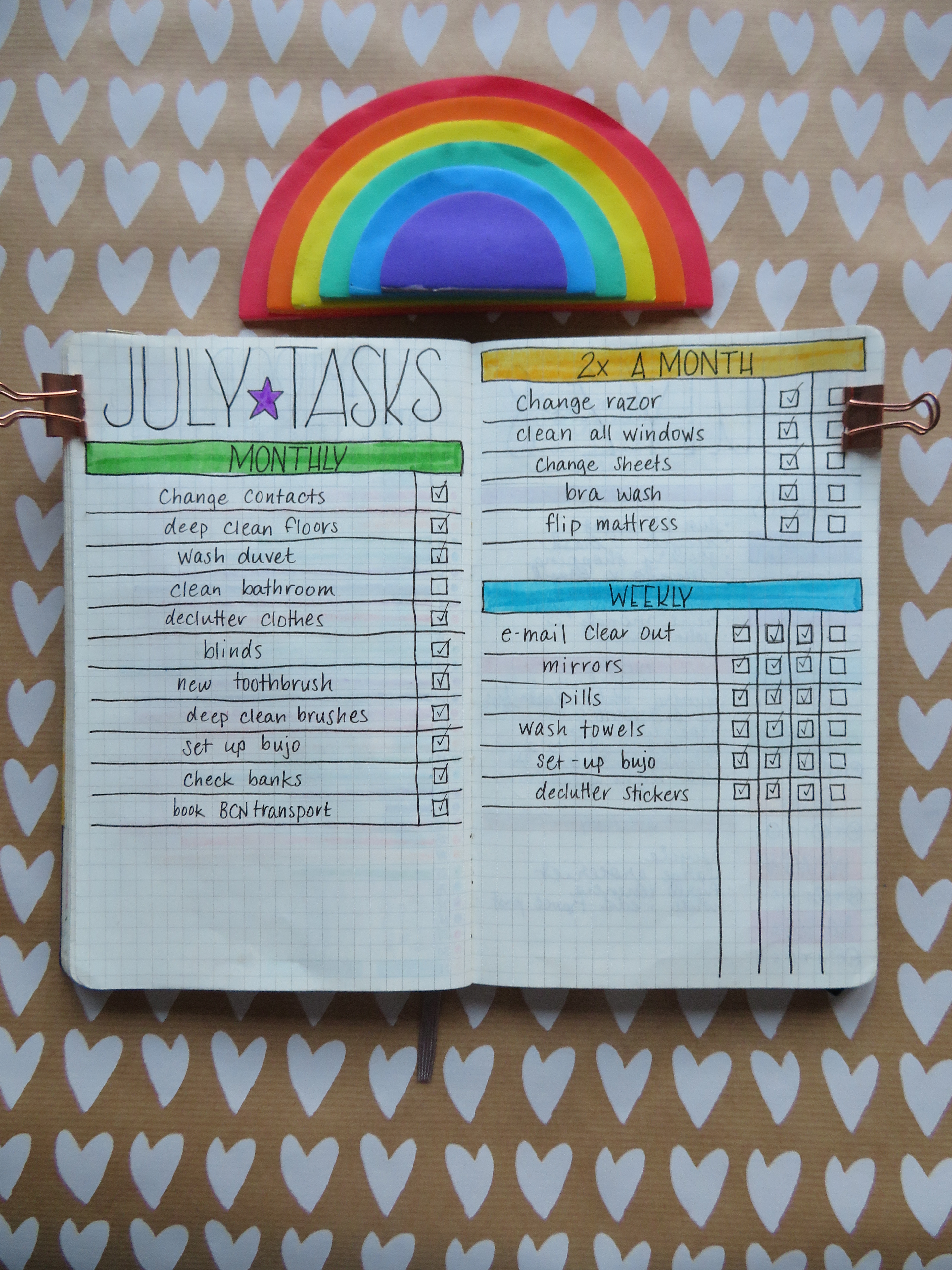 One page that I added that I absolutely love is my monthly tasks page for things I need to do once, twice or four times a month. It has been so helpful with organizing my time and while I’m not using one next month (too much travel) – I definitely will start again in September.

My other favorite spread was my mood tracker which again is just rainbow bars. I just like the look of it and I’m doing the exact same thing next month with a couple of different colors. 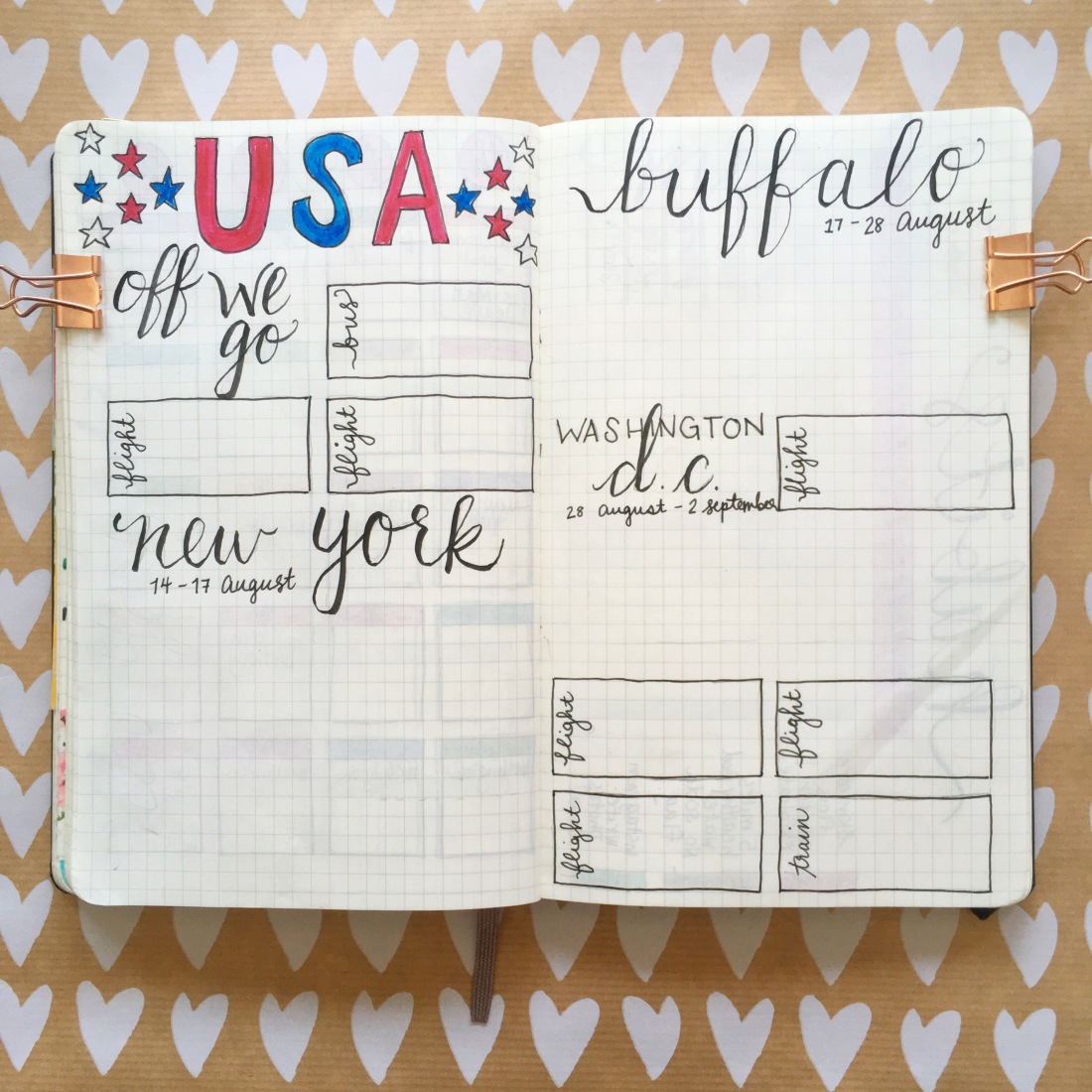 The other thing that I will say is coming along is my handlettering. I’ve been working on using both a brush tip marker and also crayola supertips. I’m definitely taking more time with the Supertips but the Brush tips are coming along nicely. I’m definitely getting to be less self conscious and more excited for that part of my spreads!

What’s to come in August?

Well the first week of August – I’ll be in Barcelona seeing my two best travel buddies, Janet and Liz. I’m so excited to see them both as well as Liz’s husband, Matt. For Matt and Janet, it’s their first times in Barcelona – one of my favorite cities. We are going to get a full 2 days together before Matt and Liz will head further North but Janet and I will be doing tons of museums, tours, parks, and beaches for a full week.

In the end of August – I’m going back to America! I know I already said that but I’m SO EXCITED! I don’t really miss specific things from America, although I am ready to eat all the foods, but I do miss my family and friends. It’s going to be an interesting experience – I’m bringing a friend who has never been to the States before. I just hope to be the best host possible (hey hospitality experience!).

So yeah, I think in August I’m just going to go ahead and let myself do as a Spanaird would do and just post once a week. Right now I’m going to plan on Saturdays which is a weird day for me to post. But hey – that way I have the whole week to get something together.